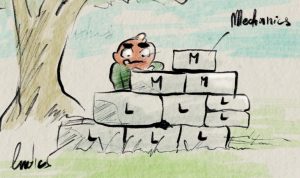 Something like two years ago, I published a 40 pages essay about game semiotics (Seraphine, 2014).
This essay was a very important step in my academic life; It was thanks to it that I could drag the attention of the professor who would become my Ph.D. Thesis advisor at the University of Tokyo: The eminent Professor Akira Baba, whose laboratory was one of the only ones focusing on game studies in Japan. Now that I started this blog, I would like to share with you – and maybe fine-tune – one of the main concepts that were driving this essay: the ludophrase.
I guess you never heard of this word, and it might be because I created it. Not simply because it is fun to build new words, but out of necessity … Because I found not existing way to express this idea. Basically, a Ludophrase is an association of in-game signs that constitutes the very basic semiotic building block of a videogame.
I’ve written the previous essay because I wanted to understand better the workings of in-game storytelling. To learn how to tell a story in a way that would be specific to gameplay, you don’t have to look at games through the lens of ludology or narratology; You have to understand how meaning is created at a lower level. It was evident to me that I had to look at game design through the lens of semiotics.

Charles Sanders Peirce (Peirce, 1955) was, inter alia, an American philosopher, and semiotician who is well known for his theory of signs. A useful framework for the semiotic analyses of anything: from films to everyday life, through paintings … and well, maybe also videogames!
His framework is based on the three trichotomies of signs. A complicated name for an idea that we can fairly simplify here.
In Peircean semiotics, there is this notion of a certain level of abstraction of a sign, which he calls, the firstness, the secondness, and the thirdness.
The firstness defines the relation of the sign to itself; we could say that it is the ontology of the sign. Thus, the firstness is monadic.
The secondness is the sign in relation to its object, the relationship between the sign and what it signifies. So secondness is dyadic.
And at last, the thirdness is the sign in relation to an interpretant. The thirdness involves three entities, the sign, the object and the interpretant; it is triadic in nature.
However, still according to Peirce, all those categories of this first trichotomy, can also be subdivided into three subcategories that are following the same pattern of triadic relationship.

The firstness – the relation of the sign to itself- can be divided into three typologies which are not yet signs because of their monadic nature, but are nonetheless essential in the process of meaning:

The secondness – the relation of a sign to its signified object – the most reused and relatable of the trichotomies of Pierce, is subdivided as such:

Then, with the thirdness, things get a little bit more complicated, but to make it simple, discourse and communication can only happen through the thirdness. Which is trichotomized by Peirce as the following types:

Now is the moment you’ll ask me, how is this useful to game-design? And I’ll answer that Peirce already gives us a lot of tools to look at videogames through the lens of semiotics, at least to analyze audiovisual contents. The third trichotomy, for instance, can help a game designer to create incentives for the player, things to induce, to deduce or to abduct. But the reason why I was writing my previous essay was to drag meaning from the interactions, from the gameplay! For this reason, I needed to make a special trichotomy – inherited mainly from the Peircean secondness in my previous essay, but maybe applicable to firstness and thirdness – that would take into account the interactions with the game state at its core.  For this purpose, my previous essay proposed the three following concepts: Actum, Tactum, and Factum.

Actum, Tactum, and Factum or Reaction, Interaction, and Fact

Following Peirce’s concepts of firstness, secondness, and thirdness, my previous article was proposing a trichotomous framework for the semiotic analyze of in-game interactions; it was emitting the hypothesis that every action performed within the game-state – triggered by the player or not – can be interpreted as a typology of signs. It is absolutely not replacing the three trichotomies of Peirce, but can nonetheless be used on top of them.

Simple association of Actums, tactums, and factums may create a form of building block for the creation of meaning within gameplay; this is what, in my previous essay, is called the ludophrase.

Mechanics and ludophrases, what is the difference?

As stated in my previous essay, “all game mechanics are ludophrases, but not all ludophrases are game mechanics”(Seraphine, 2014, loc. 457-478.), and thus, in my opinion, choosing one or the other as the primary building block of videogames may drastically influence the philosophy of the resulting gameplay. Thus this question seemed critical, as the words we use to design games may affect the way we design. The word mechanics implies – or induces as Peirce may say – the idea of mechanism, or repetitiveness. Of course, this way of thinking about games draws its justification both from the definition of the word ‘game’ – in English at least – and from the very workings of game development, but are digital games intrinsically defined by our traditional definition of games? And should videogames be based on mechanical principles for the only reason that they are made and played on machines?  The hypothesis is that considering mechanics as the core element of Game Design is a roadblock to the emergence of a narrative framework that would be entirely based on gameplay.

Game mechanics are methods invoked by agents, designed for interaction with the game state.

The definition of game mechanics given by Miguel Sicart is one of the most concise I have been given to see. It is the reason why I chose this definition to base my reasoning on the issue.
Miguel Sicart built this definition of the game mechanics precisely because it is also the definition of interactions in object-oriented programming.  Object orientation, according to Sicart, provides a “formal framework for the description of games, and as such is a useful analytical tool”. Sicart’s definition is also getting rid of the “anthropocentric”  bias that previous interpretations might have had. As the methods are invoked by “agents”, they can be called by the player or by in-game agents. Game mechanics in Sicart’s definition might well be actums, factums or tactums, which complies perfectly with this essay’s vision of game semiotics. But whenever he is defining a game mechanics, Miguel Sicart comes back to the concept of “rule”. Jaärvinen(Jaärvinen, 2008) states for example that game mechanics can be perceived as verbs with other syntactical elements, such as rules, influencing how those verbs interact with the game state. Semiotically, this omnipresence of the rule associated with the game mechanics, imposes a notion of thirdness onto the very concept of game mechanics. Particularly since Sicart describes them as “methods invoked by agents, designed for interaction with the game state”. Comparatively, the Ludophrase could be defined as a syntactical combination of interactions of objects within the game state. When dealing with the semiotics of gameplay, we need to focus on the interaction instead of the agents.

And what about the MDA framework?

The MDA as described by Hunicke, LeBlanc and Zubek(Hunicke, LeBlanc, & Zubek, 2004)is a “formal approach to understanding games”, it is presenting three levels of abstraction of video games that can be read from two perspectives, the designer’s perspective, and the player’s perspective. From the developer’s point of view, the three levels of abstraction are Mechanics, Dynamics, and Aesthetics. While, from the player’s perspective it corresponds to the experienced concepts of Rules, System and “Fun”. Here also, it seems that rules and mechanics are the two faces of the same coin. I’ll certainly come back to the MDA framework in greater details in a future blog post, but for the moment, let us present the MDA framework in a few words:
In the MDA framework, the very essential building block of a video game is its game mechanics. The authors’ definition of game mechanics is very close to the one proposed by Sicart, except it still suffers from the anthropocentric bias.  But in this framework, from the game mechanics, the basic building block,  a designer will be able to create the Dynamics which are the different parameters that will help him to achieve the game’s aesthetics. For example, a game designer might want to reach the creation of a challenge – that the authors describe as “game as an obstacle course” – as his aesthetic goal. For this purpose, he will have to fine-tune the dynamics. They give the example of “time pressure” or “opponent play” as dynamics to achieve “challenge”. But for instance “opponent play” might be a construct of game mechanics: it takes mechanics of damage taking, targeting, collision, among other things, to create an opponent play dynamics in a shooting game.
But mechanics being somehow repetitive by nature, as they are triggered by an agent by virtue of a law, we might want to have a basic building block for games that retains the emphasis on interaction; but departs from the idea of repeatability implied by mechanics. This preoccupation is mainly semantic, but if we take the ludophrase (the interaction) as a signifier, as an essential building block of this framework, it might widen the possibilities that game designers can envision.
There is maybe the term Ludics, which was first used by the French Logician Jean-Yves Girard(Girard, 2001); and which he defines as “a purely interactive approach to Logic”. In a way, Ludics is putting an emphasis on the interaction instead of the proposition. Thus we could borrow the term of ludics to the fields of logics and mathematics and use it as the first level of abstraction of the framework. Of course in the context of game semiotics, the signification of the term is entirely different from its use in mathematics. But we could nonetheless propose the following modification of the framework.

With Ludics – pure interactions – as our most important building blocks for game design, we would become able to create a wider range of dynamics, a range that would comply more with the idea of gameplay as a story-telling device. (Which is the objective of the research I am conducting.) Indeed if we think of Ludophrases in terms of compounds of reactions, interactions, and facts ( or actums, tactums, and factums); we can be freed from the repetitive (mechanical) nature of game mechanics. Thus we can create ludophrases that don’t necessarily occur according to rules, and may occur even just once. It becomes then possible to create gameplay interactions that may change or even disappear during play, creating infinite possibilities of meaning through contrast. Of course, it does not erase the necessity of mechanics in game design, but mechanics becomes just one expression of ludics among others.

I tried to keep this article as short as I could, so it may seem a little condensed to you. If you are interested in reading more examples illustrating my thought process on the matter, I invite you to read my article from 2014 on Kindle (and now also available on ResearchGate). However, you might realize that some of my ideas have evolved since. If there are points that you would like me to develop in future blog posts, please do not hesitate to comment!

PhD Candidate at The University of Tokyo