A few thoughts on Elden Ring 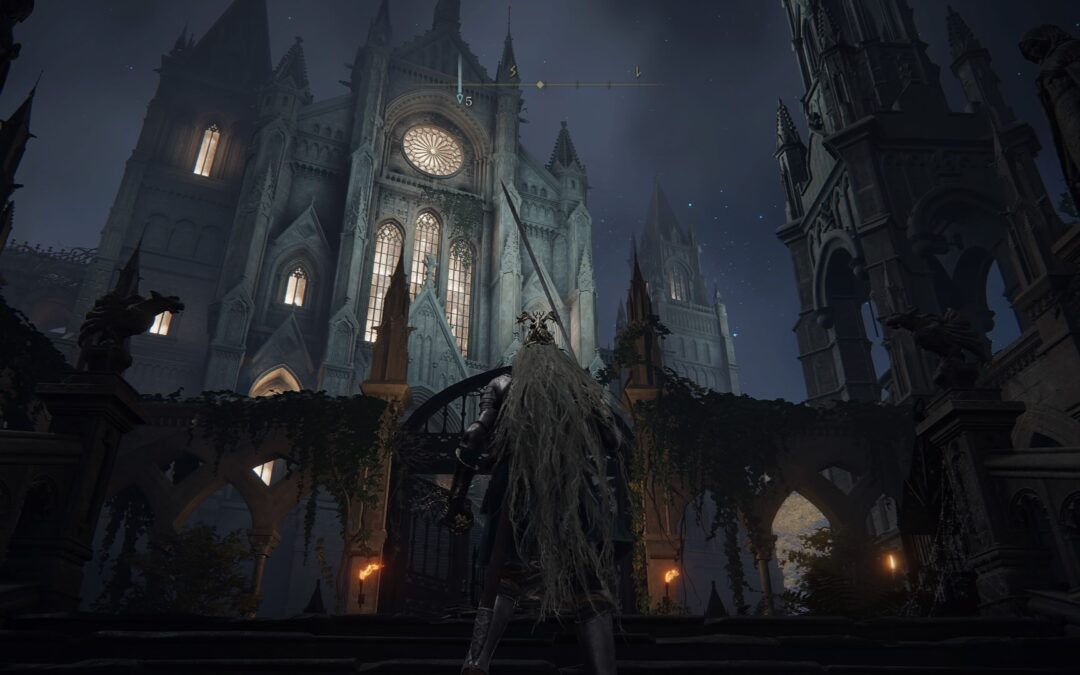 I will not lie, like many I’ve been pouring quite an amount of hours lately into the phenomenal From Software title Elden Ring. And, since I’ve decided to resurrect this blog that I had nevel really used before, it was probably the best timing to share some thoughts on Elden RIng and the art of Storytelling for Videogames. I played the game entirely in Japanese, since the boxed version of the game in this country does not contain an English Translation for the written text and interfaces. This has probably affected my perception of the game’s narrative. In this blog post I will not address the controversy around the accessibility of the game. However, it might be a very good subject for a subsequent blog post. Probably because of the previously mentionned issue of accessibility, I have never been a real Souls player. I’ve painstakingly dragged myself through the gothic/cosmic horror feast of Bloodborne by love of the genre, and I am probably dragging myself just as painstakingly through the dark fantasy universe of Elden Ring for the very same sake of a genre I adore. Elden Ring has recently reap the fruits of the studio’s labor over more than a decade, and was released to an unprecedented critical acclaim. Something that was not seen probably since the release of Nintendo’s Breath of the Wild in 2017. That was already 5 years ago now. Strangely, gameplay-wise, there is not much that Elden Ring does better than it’s PG7 concurrent. System-wise, your character cannot climb over mountains, riding your horse is stripped to the strict minimum, and while the world is teeming with dungeons, puzzles are minimalistic, and most of what you’ll be doing in this game is fighting. For a reminder, the magic of the approach of Breath of the Wild regarding its Open World was its emphasis on being able to go wherever you want, and interact with the world in rich and emergent ways. The vegetation can be cut, or even burnt. Any horse you encounter can be tamed and named, and most importantly every tree, every mountain, and every cliff can be climbed (Though houses and dungeon walls are somewhat an exception). So what differentiates the open world approach of Elden Ring? Elden Ring, in terms of design philosophy is probably the closest you’ll ever get in a modern game to the impression that the very first episode of Zelda has left on players. You are dropped on a world map and you are simply left to figure out what to do next. What makes both the strength and the weakness of Elden RIng is the very fact that it tries as much as it can to use the semantics of its gameplay to guide you through its world. Elden Ring, lets you figure out where you can and cannot go. It does not take the player by the hand, and while it contains a tutorial, the section can be missed. I actually missed the tutorial of the game, before discovering it later on.

Like every game in the Souls series, Elden Ring starts with a boss encounter that is probably too hard for you if you are new to the franchise. The boss is supposed to kill you. In Elden Ring, this boss is a “Grafted Scion,” an abomination with multiple arms and legs that hits you like truck. As you leave your starting point, you see the beautiful golden “erdtree” reminiscent of  Laurelin and Telperion, the two giant trees that stood tall amidst of the continent of Valinor in the first age of middle-earth. Elden Ring brings you within the first seconds of gameplay in this Tolkienesque territory, and everything is there to make you feel like a traveler in middle earth: The colors, the scale of both nature and architecture, without forgetting the beautiful soundtrack. But Elden Ring doesn’t let you much time to admire the landscape. As you go further, the Grafted Scion stands in the way, and he’s about to attack you. You can beat this enemy, but you’ll end up dying in a cutscene afterwards anyway. After this encounter, your character is transported in some ancient underground ruins. After a short cutscene showing your resurrection, you can start your adventures in the Lands Between ( and yes, that does sound semantically very close to middle earth.)  A mysterious ghost sitting next to a cliff invites you to go to see what there is beneath. On the other side, a large gate is illuminated by a tiny golden Erdtree.  I did not jump in the pit, and that’s how I missed the game’s tutorial. The first seconds of the game had taught me to follow the glowing tree… I simply continued doing that. It’s only about 15 hours in the game that I came back to this place to discover that the tutorial level was down the pit.

However, once out of the underground ruins, you find yourself in a beautiful plain, and you can see the giant Erdtree whose light is like the sun’s in this world, except now it seems a bit further. The game camera places you in the direction of this Erdtree, and as a player who is used to modern Game Design’s rules of thumb, I follow the light like a mindless moth going to a flytrap or Icarus burning his wings too close to the sun.

Having learnt my lesson from the encounter with the grafted scion, who destroyed me in less than 10 seconds, I see a tall mounted golden knight on the way. I try to walk as far as I can from him. But soon enough I find myself in front of the gates of the first dungeon. At this point, a giant Troll, and several soldiers with crossbows block the passage. Even though I promissed not to talk about the accessibility controversy, it is nonetheless intertwined deeply with the philosophy of discovery behind the game. It’s only after a few game over that I will discover that I did not go the right way. Death is part of the vocabuary of Elden Ring and every games in the souls series. However, as opposed to other games of the series where you are offered maybe one or two path through a dungeon-centric experience, here the possibility space is somewhat wider. In Elden Ring, it’s ok to simply decide to go somewhere else for a while. And after countless death in front of those gates, I simply realized that I could visit the world map and find something that would be achievable for me. The game shows you those doors to make sure you understand that it’s where you need to go “to advance the main plot.”

However, when I started to go south in the weeping peninsula, where enemies seemed easier to beat and dungeons within reach of my level, I started to fall in love with the lands between. The level design there is all in verticality. From afar, you can see a tower, a castle, a bridge, a lesser-erdtree. Especially since I was playing in Japanese, I had no access to the verbosity of object descriptions and other lore dumping for which the series is famous. All I had access to was the environment I was presented with. When I arrived at the southern end of the weeping peninsula, at the sieged Morn Keep, I could feel the references to Kenta Miura’s Berserk, with its gruesome battlefield scenes where corpses are piling up and hanged men are on display on the castle’s walls. While NPC behavior are not the richest in this game, small situations like a procession, a chant in latin, monsters celebrating victory in a siege, are doing enough to make me feel what’s happening in this world I am presented.

Elden Ring though makes you feel like you are crossing a succession of beautiful epic paintings. Nothing really is in motion here. Even after you defeat its boss, Leonine Misbegotten, a giant sword wielding Lion-like monster reminiscient of Berserk’s antagonist Zodd, the castle will still be under siege as if you didn’t have any impact on this world you traverse. In every Miyazaki’s game this loop-like situation, so inherent to videogames, seems justified by the death-centric theme the games are always given. Your main character is a ghoul, your antagonists are ghouls, your allies are ghouls, and finally you adventure takes place in a dying world…

It appears quite justified that nothing really moves forward in a world that seems to be designed to function as one of the circles of hell. In this series, the theme serves the age-old limitations of videogame narration. The loop and the absence of time seem justified when characters seem to be damned like sysiphus to restart over and over again their tasks, that actions have no consequences, and that basically the character you control is just as damned as everyone else.  The whole point of a souls game is maybe that weird moment when you start to appreciate damnation and you know so well the world and its patterns that they feel like old friends to you.

Elden Ring is maybe not innovating as much as other games, on the contrary on many aspects its game design can feel almost out-of-date. But Elden Ring’s strength lies in its deep understanding of videogame design’s tradition. A bit like a 21st century’s version of Super Ghouls and Ghosts, it embraces the pattern, the repetition, the simple appreciation and pride of traversal, mixes all those familiar elements with an outstanding worldbuilding to make it the star of the show. Just like players must hone their skills to appreciate games of the souls series, in terms of game design, Elden Ring feels like the result of years of honing skills in patterned based gameplay and dungeon design. These classic skills of game design were masterfully scaled to make a breathtaking open world.

So even if Elden Ring does not invent much, its the way that it puts together its ingredients that makes it the unique game that it became.